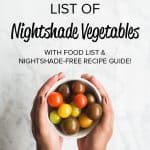 This is the complete nightshade vegetables list, with a free downloadable food list and nightshade-free recipe guide. Find out what nightshades are, who should avoid them, and if they can cause inflammation.

Let me first promise you that nightshade vegetables are not secretive plants that are out to get you. In fact, for the appropriate person, nightshades are healthy, nutrient-filled foods; they aren’t inherently bad for someone who tolerates them. So why am I even talking about them?

What are nightshade vegetables and fruits?

As someone who personally avoids nightshades (they trigger my autoimmune symptoms and cause joint pain), trust me when I tell you, they're hiding everywhere! The two most common culprits of hidden, sneaky nightshades: “spices” and potato starch.

Spices is considered a trade secret, so a brand does not need to provide you as the consumer with detailed ingredients on what this includes. More often than not, a product that includes “spices” on the ingredient list will contain nightshades.

Potato starch is at least easier to identify, but I still consider it to be a sneaky nightshade vegetable. It's hiding in so many foods! Be sure to check your labels if you're avoiding nightshades.

The takeaway here is that simple or homemade foods are the safest and easiest meals for someone on a healing elimination diet like the autoimmune paleo protocol. But I get it, sometimes convenience foods are necessary – either because you’re short on time or short on energy. Read your labels carefully, and keep this list handy.

When should nightshade vegetables be avoided?

I mentioned it before, but nightshade vegetables are not necessarily bad. However, if you have an autoimmune disease or chronic inflammation, you may have heard that you should avoid nightshades.

While anyone can have an allergy or intolerance to nightshade fruits and vegetables, there is a certain subset of people that have a greater propensity to not tolerating nightshades well.

You may have a greater risk of intolerance to nightshades if you have:

If you identify with any of the 5 conditions I’ve listed above, you may in fact be dealing with pain or inflammation in your body triggered by nightshade consumption.

How can I tell if I have a nightshade allergy or intolerance?

I personally had no idea I was reacting to nightshade vegetables until I followed the AIP diet. According to the foods list for the AIP diet (click here to get a free printable download of this list!), nightshade fruits and vegetables are to be avoided for a minimum of 30 days before reintroduction.

Reactions to look for with a nightshade sensitivity could be:

Without removing nightshade vegetables from your diet for a period of time to allow your body to heal and reduce inflammation, identifying reactions to those foods can be very difficult. If you suspect you may have a nightshade allergy or intolerance, or you have one of the conditions I mentioned above (rheumatoid arthritis, autoimmunity, IBS, impaired digestion, or joint pain), I’d strongly consider an elimination diet (like the AIP diet) to test your sensitivity.

This fancy-sounding herb is what’s known as an adaptogen. It’s Ayurveda to modulate and support the stress response. It’s usually found either by itself, or in supplements designed for times of stress.

Fun fact: all of the different colors of pepper (green, yellow, orange, red) are the same kind of pepper, just at different stages of maturity. Fortunately these are pretty easy to recognize, but they might hide in a vegetable mix, or guacamole.

You probably won’t come across this often, but anything with the word “tomato” should be avoided.

These are also known as ground cherries which are not the same as regular cherries. Cape gooseberries are a “superfood” that you probably won’t find hidden in any prepared foods. If you’re avoiding nightshades but not on the autoimmune paleo protocol, you might find these in a trail mix.

This is a pretty unusual one, but keep in on your list! It’s a tropical shrub and a relative of eggplant.

You know this as a fun purple vegetable (technically fruit, actually!) often found in middle eastern food. Eggplant is not usually a hidden ingredient, but watch for it in pre-prepared roasted vegetables.

These are not the same as regular huckleberry. You also won’t find these on their own unless you’re eating berries in the wild, which is generally not recommended.

This tiny red superfood (also known as wolfberry) is expensive, so it’s fortunately not often a hidden ingredient. You’ll usually find it in trail mix or nut and seed bars, which if you’re on the autoimmune paleo protocol diet you’ll be avoiding anyway.

These are extremely common seasonings in taco mixes, and any pre-made or packaged foods. Read your labels, and remember – keep an eye out for “spices”!

This native australian plant is related to the bush tomato and has edible fruits when dried. It’s unlikely you’ll encounter these, but you never know where your travels will take you!

This is a fruit native to South America that resembles a tomato. Another rare one, but it’s important to always be on the lookout!

This Hungarian spice is used to give food a nice smoky flavor. It’s common in many International cuisines, pre-packaged foods, and spice mixes.

Don’t get confused with the spanish word for cucumber! Cucumbers are not nightshades. Pepinos, however, are named as such because their flavor is reminiscent of a cross between a cucumber and a melon. If you’re shopping at a Latin American specialty store, don’t be so adventurous as to try these!

This is actually just the Spanish word for pepper, which you might find listed in seasonings or packaged foods.

Unfortunately, regular french fries are out. Besides looking for potatoes in roast vegetable mixes, be on the lookout for potato starch in “paleo” alternatives to starchy foods. Sadly, no more Trader Joe’s cauliflower gnocchi.

This includes all potatoes (russet, gold, red, etc.) with the exception of any variety of sweet potato or yam.

Fortunately, there is no deprivation necessary. If it's a yam or a sweet potato, it doesn't fall within the nightshade family. You can make your own sweet potato fries with bacon jam, or my ranch cauliflower mash as an awesome side dish.

These Andean fruits are also very similar to tomatoes, but shaped more like cranberries. Once again, very uncommon in the United States, but might be something you come across in a Latin American grocery store.

In Spanish, this means “small tomatoes”. These are also frequently found in Mexican food.

This is often one of the hardest nightshades for people to give up. Before you start weeping over the loss of your sauce, you can make your own “nomato” sauce that is free of nightshades, and autoimmune paleo protocol-friendly.  Avoid salsas, pico de gallo, some guacamoles, and watch for “tomato paste” as an addition to some packaged foods.

In spite of the substitutions I sprinkled in to the above list, you might be feeling a bit lost without some of your nightshade-filled favorites. While I’m a big proponent of stepping out of your routine and taking this as a chance to try new things, I’ve recreated classic comfort foods in a way that can fit into a healing diet.

All of these nightshade free recipes are Paleo, AIP, dairy free, and some are even Whole30 friendly!

Want a marinara or tomato sauce?

Needing a lunch or dinner dish? 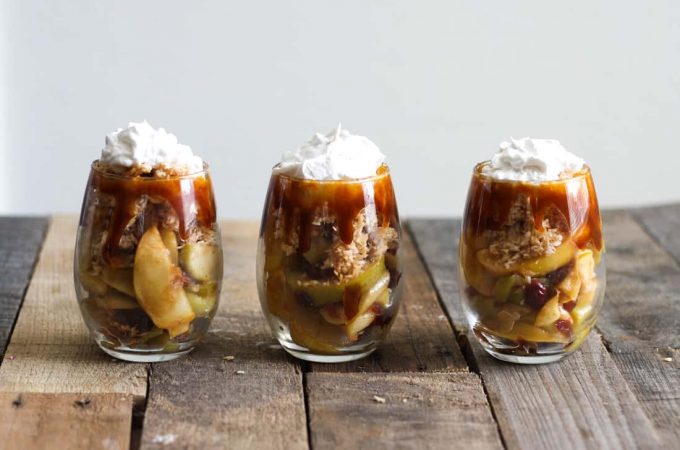 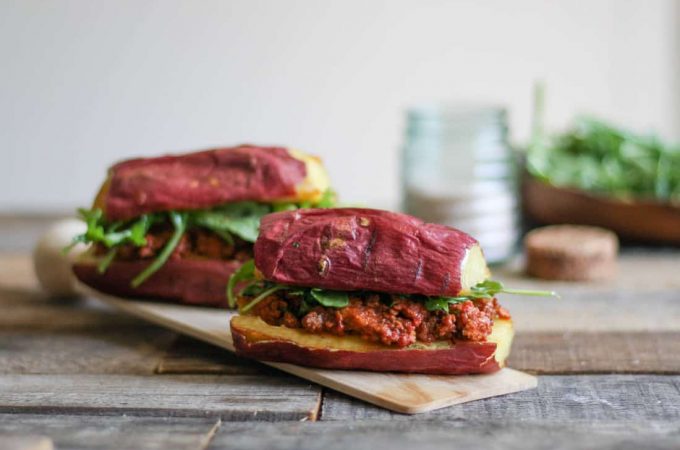 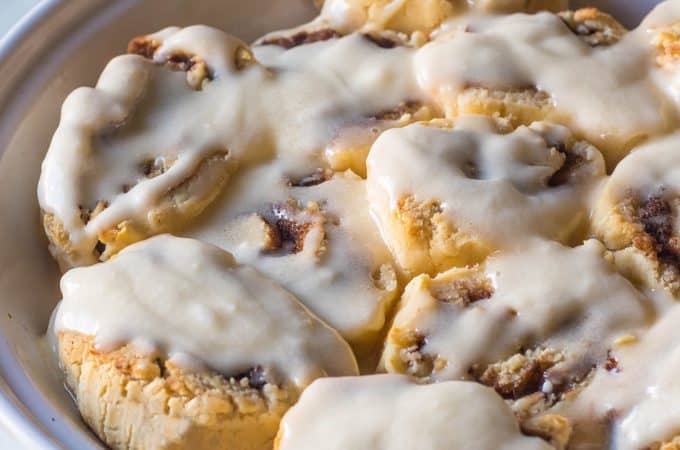 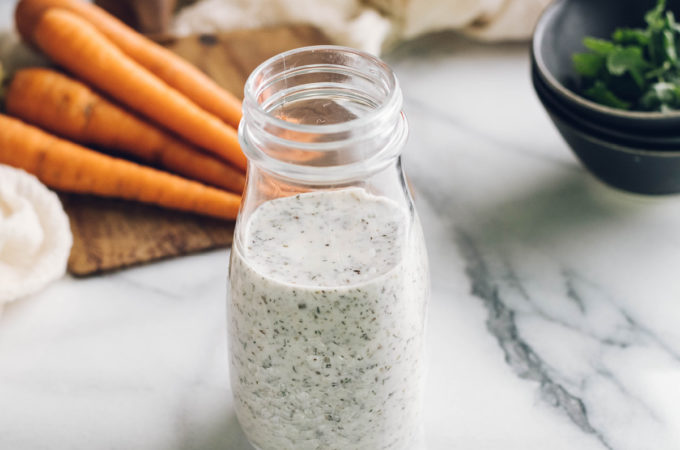 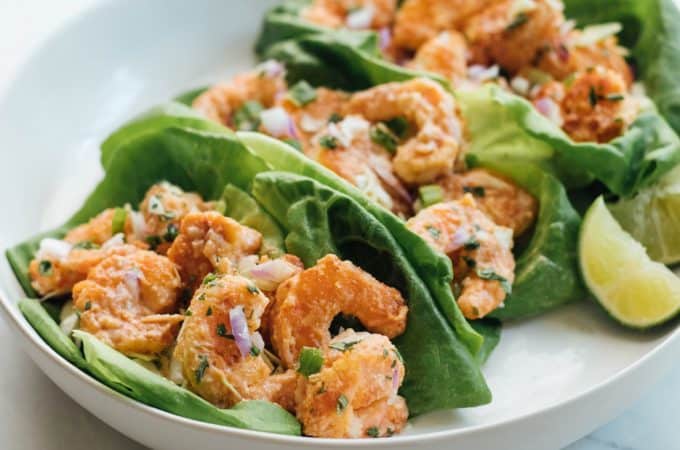 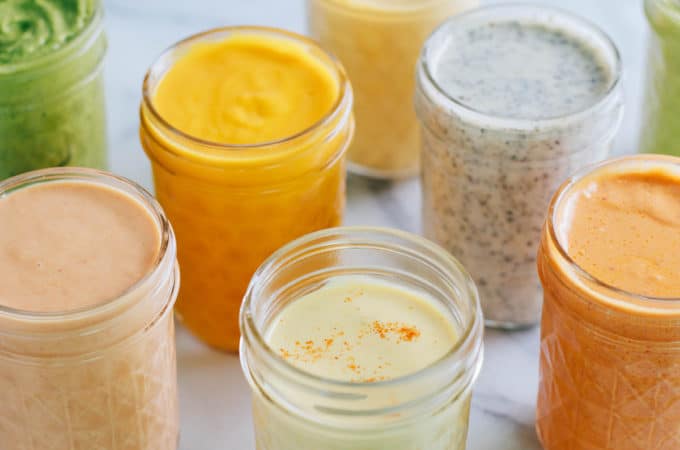